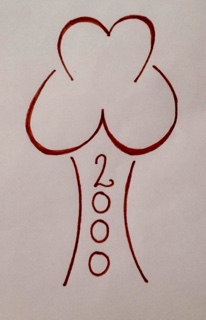 The site, once known as Battericks, was used as small-holding allotments for local men who fought in World War 1. An allotment was one acre with stone markers in the top and bottom hedges to mark each plot's boundries. The smallholders had to grow crops such as turnips, mangolds, fodder beet, potatoes, not grass. In later years, the plots were rented out to farmers. 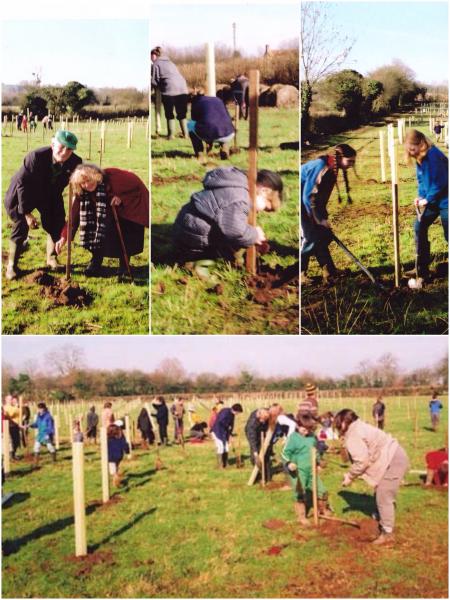 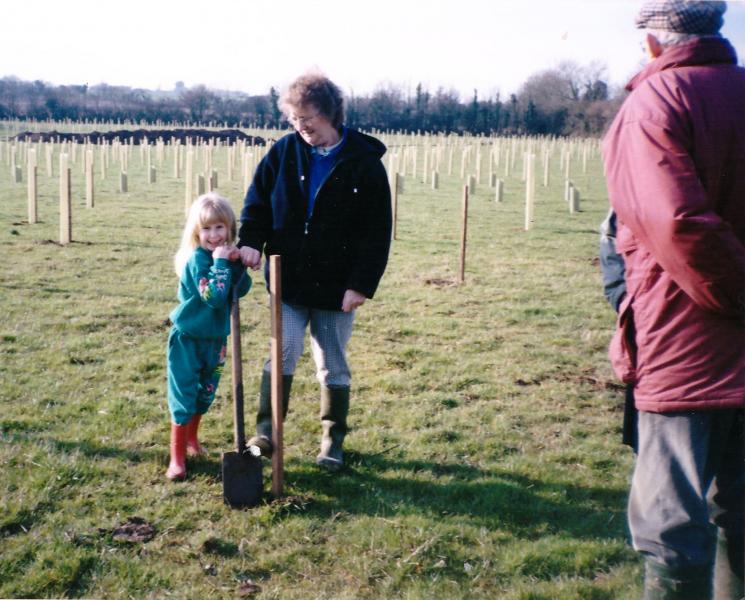 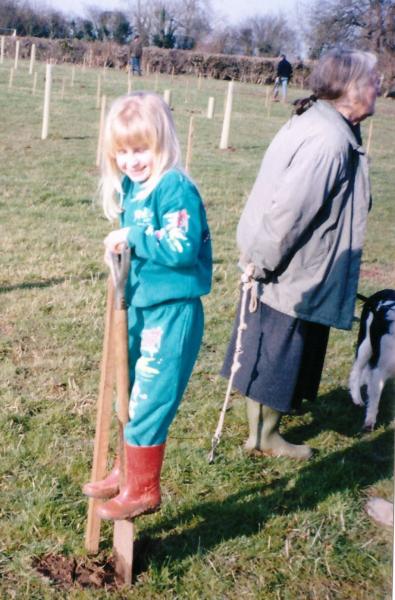 Past and present uses of trees found in Millennium Wood

To see the trees listed below, follow the Tree Identification Trail shown on the information board sited in the car park. 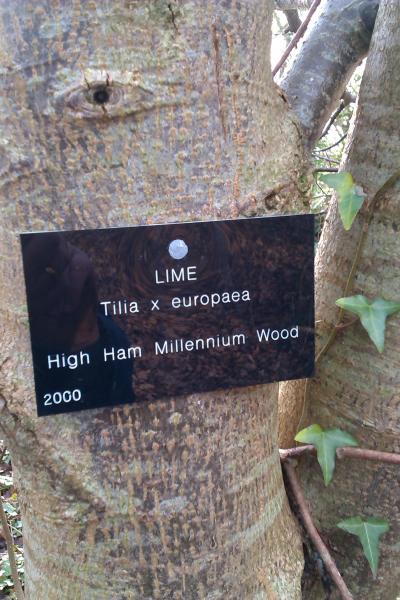 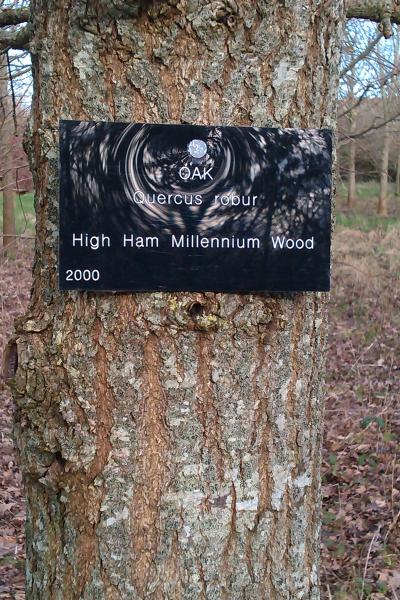 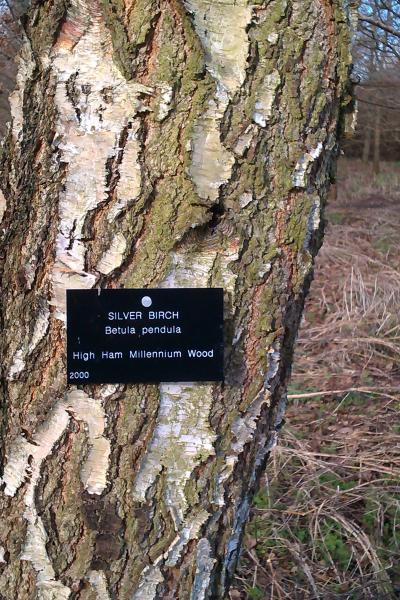 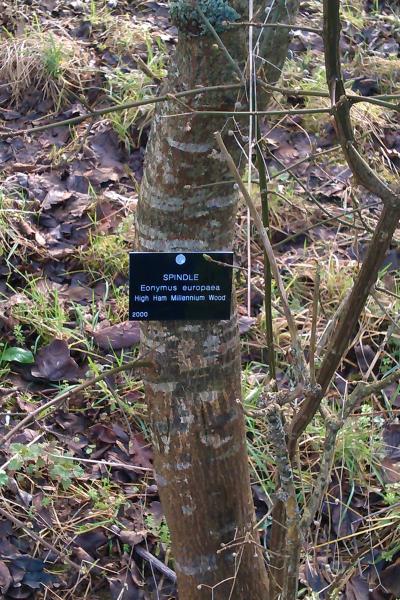 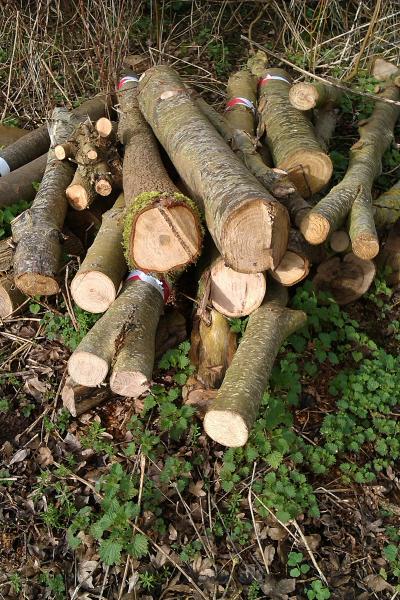 Thanks to the people who designed this wood, we have inherited a wonderful variety of deciduous trees which will, in time, become a valuable asset to   the parish. Although the wood is relatively young, it can still produce firewood from the thinning of the trees and, as time goes by and they get better, the oak and ash can be cleaved into fencing among other things, and the other species would be of interest to wood carvers and makers of all sorts. finally, the trees will reach sawmill size and made into planks, beams, flooring etc and, of course, firewood at every stage.          Roger Hall

Once used to in the manufacture of laxatives, dyes, explosives. Charcoal from its wood was used as an ingredient of gunpowder and in the making of fuses because of its even, slow-burning properties. Butchers used the sharpened wood for skewers.

The ash was once believed to have medicinal and mystical properties - if a sick child was passed through the cleft of an ash tree, it was cured. Burning ash logs was thought to drive evil spirits out of a room. The wood is highly regarded for its strength and pliability and is used to make handles for tools such as axes and hammers, hockey sticks, oars and spars, and in the past, tennis rackets and skis. Ash burns well seasoned and newly felled

Since prehistoric times, flexible hazel rods have been woven into a range of useful products such as the framework of coracles, panels for wattle and daub walls, basketwork. To ensure a constant supply of hazel rods, hazel bushes were coppiced (cut back to ground level), usually every 7 years.

The stringy inner bark was once used to make mats and ropes. Lime wood is light and fine-grained and is used for woodcarving and the making  of musical instruments.

From mediaeval times till the early 20th century, butchers used skewers or 'dogs' from the hard white wood of this shrub to hold joints of meat together. It was also used to make charcoal, mill cogs, pestles, bobbins and spokes for wheels. The inedible berries were once used to make lamp oil.

Sometimes known as great sallow. The bark contains tannin and the drug salacin, used in medicines. The sapwood used to be used to make clothes pegs, rake teeth and hatchet handles.

Druids in Celtic Britain held the tree as sacred, the mistletoe gathered from the tree used in secret rituals. Once iron tools became available, the very hard wood was widely used in constructing buildings, and could be grown into curved shapes and then used for the cruck frames of houses, and the supports of ships. The acorns were once an important animal foodstuff, feeding pigs that were turned loose in the woods in autumn. Tall, sparsely branched trees are still in demand for oak panelling and furniture.

The silver birch was revered by the Celts - it was thought to have sacred powers of renewal and purification, so the twigs were used in homes to drive out the spirits of the old year.  The timber was used for the backs of brushes and tool handles. Birch twigs are still cut in winter to make besom brooms for gardens, and until recently, for forest-fire beaters.

The hard dense wood was used from ancient times to make spindles. The 'spinsters',  usually unmarried girls, spun the wool using the spindles. The wood of the spindle was also known as skewer wood and peg wood, indicating other uses. Today its wood produces high-quality charcoal used by artists. In the past, the powered  emetic leaves and seeds were dusted on the skin of children and animals to drive away lice.

The name is a corruption of wayfarer's tree, but it has an older name, hoarwithy. The young twigs are so flexible that they were used to bind faggots. They were also used to make switches for driving livestock. In the past, the black berries were used to make ink, and the hard wood from the stem was carved to make tobacco pipe mouthpieces.

The resemblance of the kernel to the human brain led to the medieval belief that the walnut could cure mental disorders. The oil from the nut was used in the 19th century for the manufacture of soap, and a decoction of the leaves for killing slugs. The wood is a valued timber in furniture production. 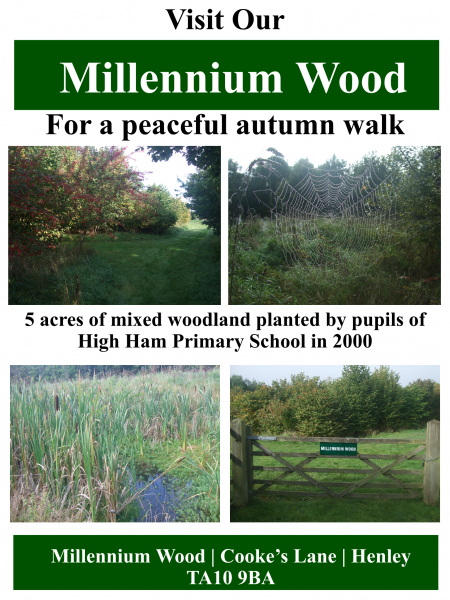