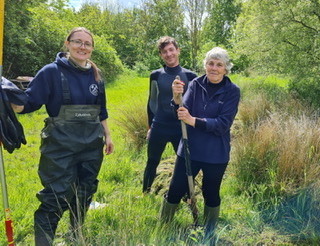 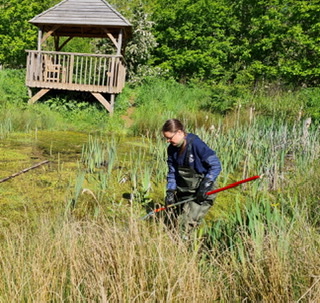 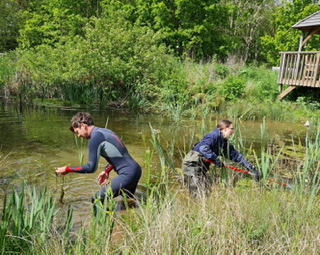 February 2021
Parish Lengthsman Craig Howe, assisted by Phil and Simon, cleared dead wood, lifted crowns, in the Cemetery, St. Andrew’s graveyard and The Green. A SSDC Conservation Area tree work licence was given for the work on The Green, and the Diocese gave permission for the work in the graveyard. The rest of the trees on The Green were pollarded late last year by the same team. The work in the cemetery was to clear the stone building from encroaching tree growth. The PC, as owners of The Green and Cemetery, are responsible for their care. 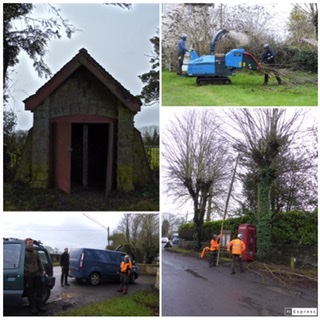 Craig was busy this month in Millennium Wood  continuing the programme of thinning to allow more growth for healthy trees, and coppice some of the hazel trees. The woodland is now looking less like a plantation! Some of the thinning have been left in the Den Areato provide more den-building materials. At the cemetery, Craig continued the task of removing shrubs and trees from the wrought iron fencing, installed in 1924. Work on clearing pavements, grips and drains, continued. 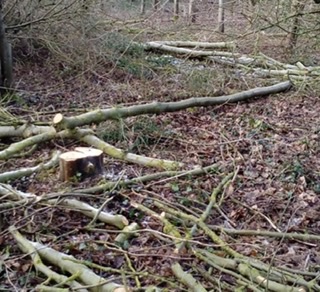 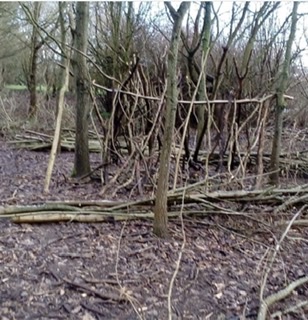 MW/Cemetery: final grass cut of the year
The Green: trees pollarded.  2 trees left to do along the boundary of the Old Rectory due to delay of power shut-down. Planning App for tree work in Conservation Area applied for Feb half-term ‘21. Power shut-down will be applied for.
Playing Field: fence repairs in the play area/car park/bmx track.
Various locations: drainage work- clearing of grips, grids 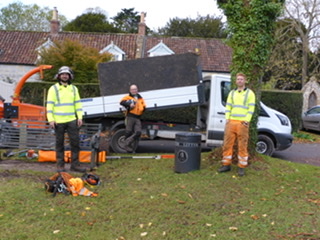 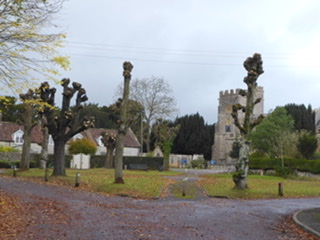 August-September 2020
76hrs worked
Works carried out during last two weeks of August and September include the routine grass cutting at the cemetery, Millennium Wood, verges and footpaths. The Site meeting at Millennium Wood 25th August (Craig Howe, Dave Vigar, Amanda Chuter) to discuss future works and management. The wall at The Pound has been cleared of ivy and bramble. A power shutdown has been arranged at the end of October to enable the reduction of the trees on The Green. SID Speed Indicator Device installation Picts Hill. 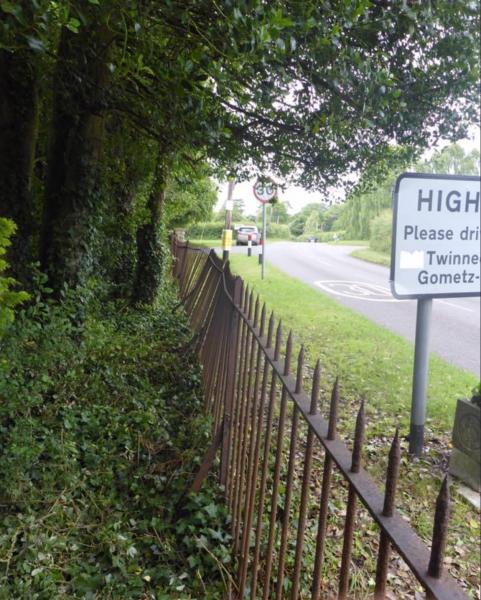 Jan-Feb 2020
Drainage: Given the scale of rainfall this winter, Craig’s focus has been on the most  affected sites  rather than working around the parish in a methodical way as  in previous years.  As requested by the PC, Craig booked a SSDC StreetScene drain sucker to clear 17 blocked drains. Craig provided the team with a map for the location of the blocked drains.
Pavements: While StreetScene team were in the parish, Craig  arranged for them to clear the leaves on the pavements near the school. Craig also cleared the pavement of debris between the corner of the school to Manor Farm. Thanks to Jane Vigar for additional clearing.
The Green: Crowns lifted on the trees affecting visibility splays. Late autumn/winter the trees will be fully pollarded - a job done periodically. Craig will apply to the planning authority for permission to carry out tree works in a conservation area, (shouldn't be a problem as its a re-pollard), and arrange with Western Power for a power shut-down as there are power lines passing through some of the trees.
Church wall corner: one of the 3 buttress stones has been re-set - the 3 stones while small, do keep vehicles away from the wall.
Millennium Wood: Craig has continued thinning of selected trees
The Pound: SSDC granted Craig Conservation Area permission to carry out the reduction work on the lime tree. in a conservation area. 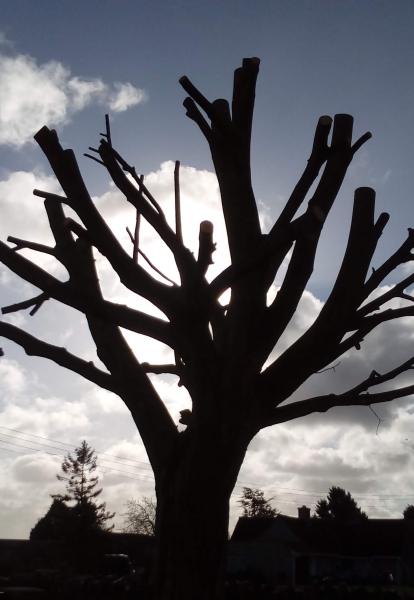 Play Area - cut back the hedge adjacent to the bmx track.
Drainage -  clearing grids and grips - work ongoing. Recording blocked drains as requested
The Pound -  application made to SSDC Planning to carry our work in conservation area ie the lime tree.
The Green -  chasing western power about clearing the branches around the utility cables on the village green -  no success so far. Issue raised over a year ago, they are being pretty slack
Millennium Wood - attended Site Meeting on 29th November re  Management Plan for 2020 and beyond. 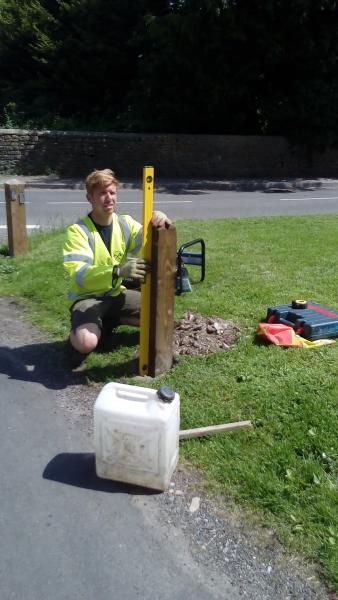 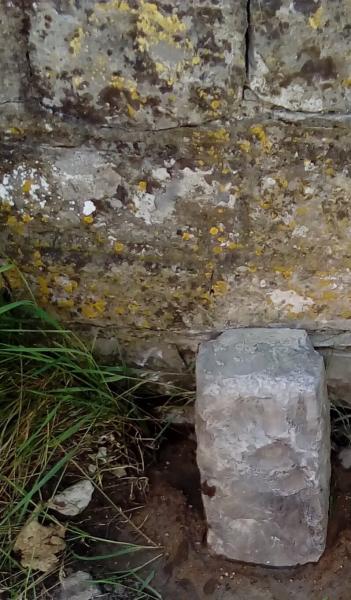 Visibility splays on the main roads

Clearing weed from the pond in Millennium wood - with volunteer help

Cleared ivy and bramble from the wall in The Pound

Weed killing along pavement between Manor Farm and postbox 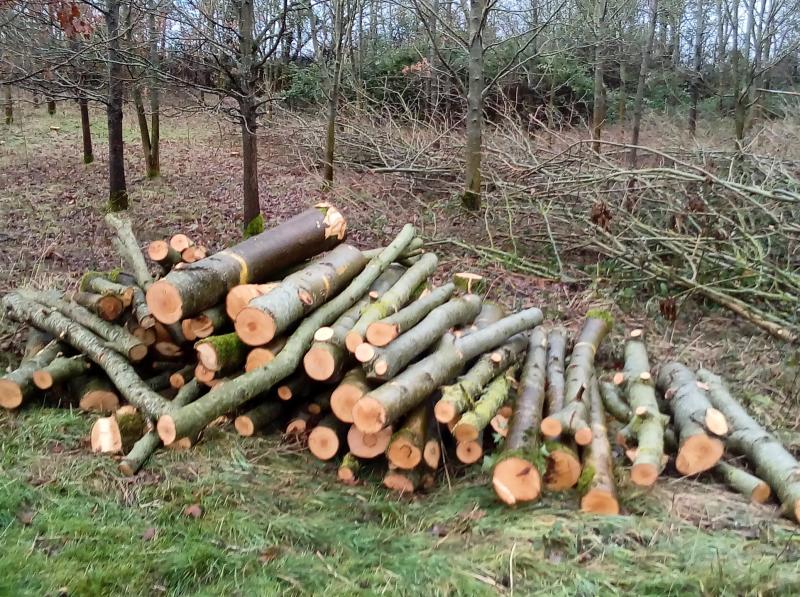 ‘Craig and his colleague Simon were doing things in a very professional manner, quite a lot of technical stuff and things like Craig keeping a constant look out for people etc coming on site when he was working in the tree and his mate keeping the road clear of twigs and branches as they were coming down out of the tree, all things that some tree surgeons are not completely on top of.’

October 2018  In early summer, Parish Lengthsman Craig, identied a problem with the horsechesnut on High Ham’s Little Green - signs of severe decay. (All of High Ham’s sections of The Green are owned and managed by High Ham PC) With its location surrounded by busy roads, it was decided the tree would need to be felled. The SSDC Tree Officer inspected the tree, identifying the cause of decay as Bleeding Canker and that felling was appropriate. The necessary permission was granted and on 29th October, Craig and fellow qualified tree-surgeon Simon felled the tree and ground the stump out.

When the conditions are right, a Wild Service Tree will be planted, and oak bollards will be installed to protect the Little Green and its tree. 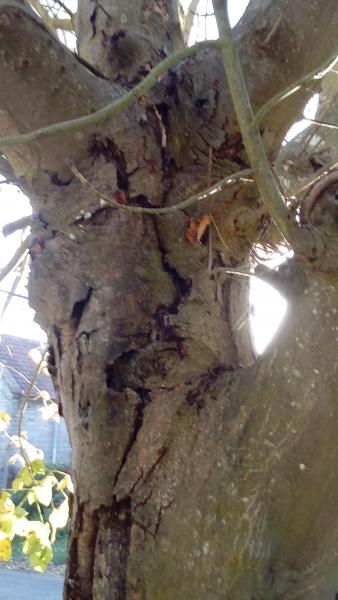 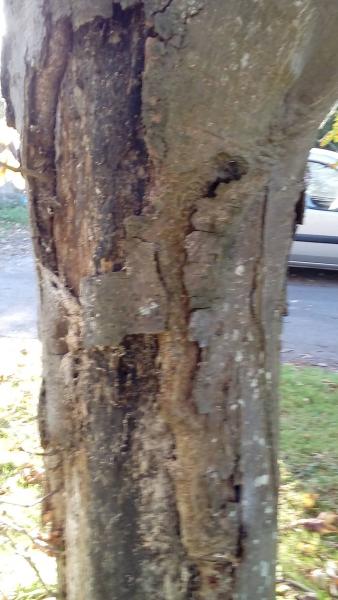 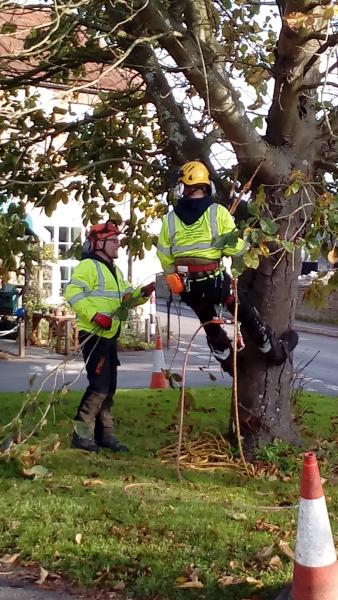 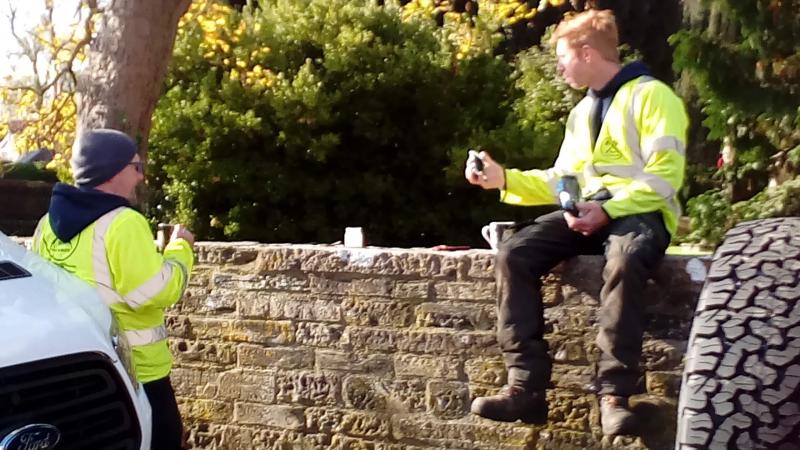 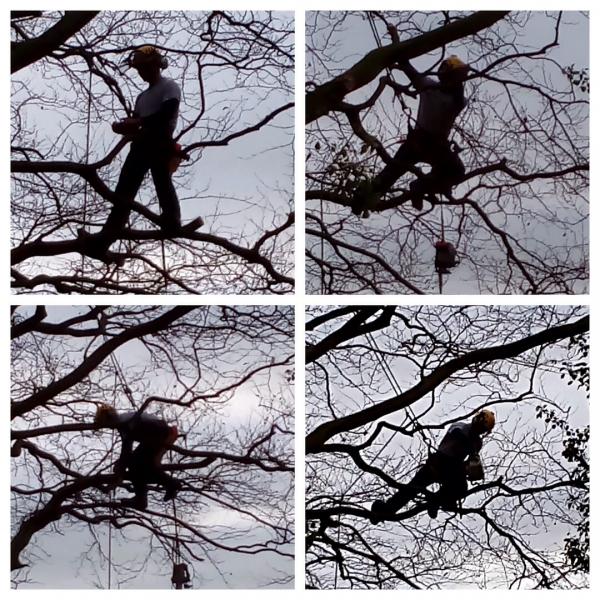 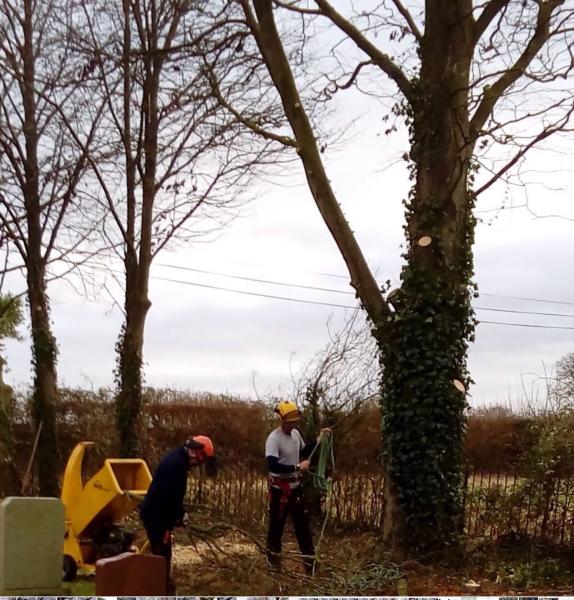 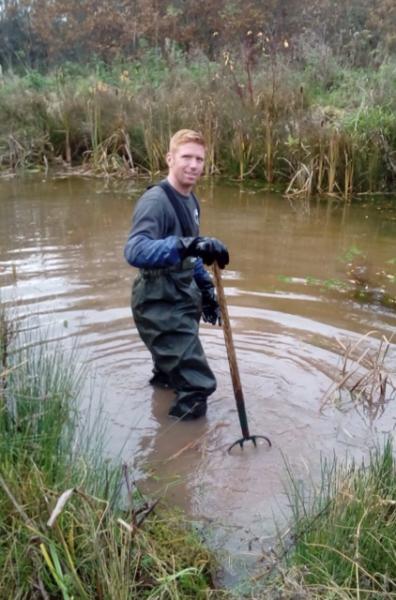 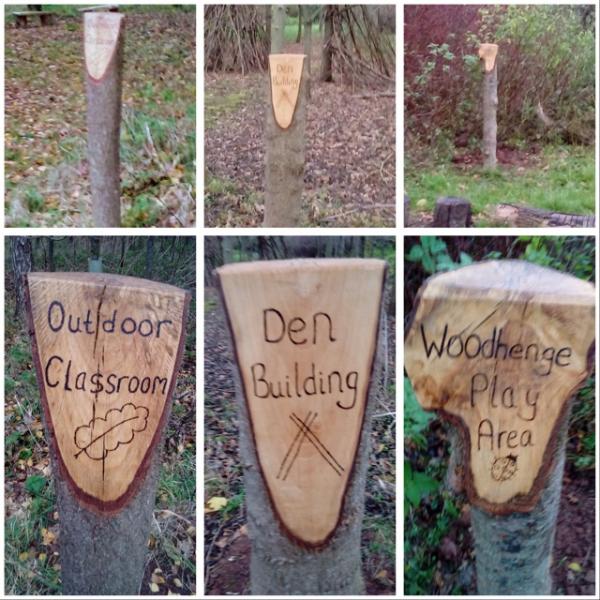 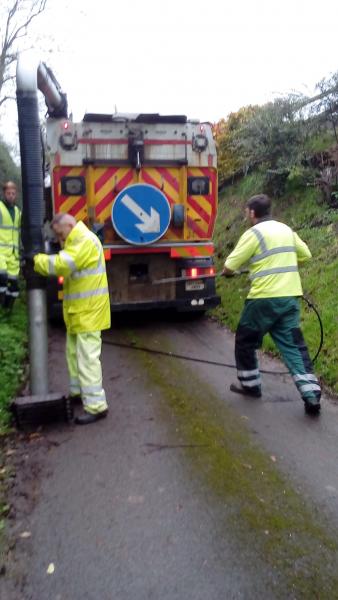 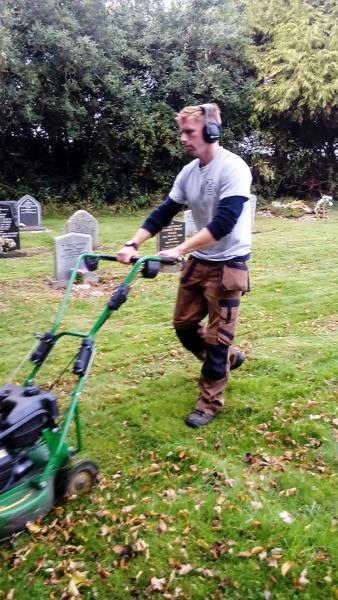 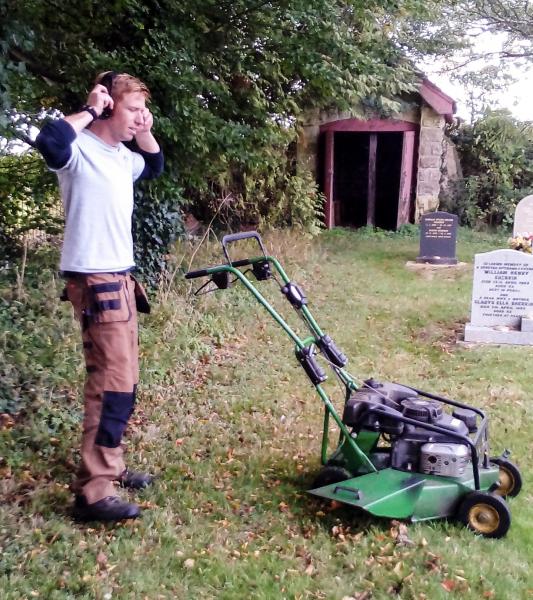 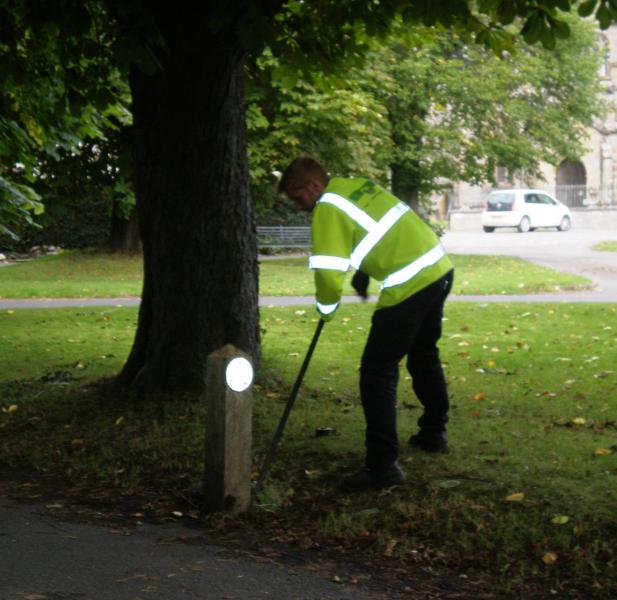 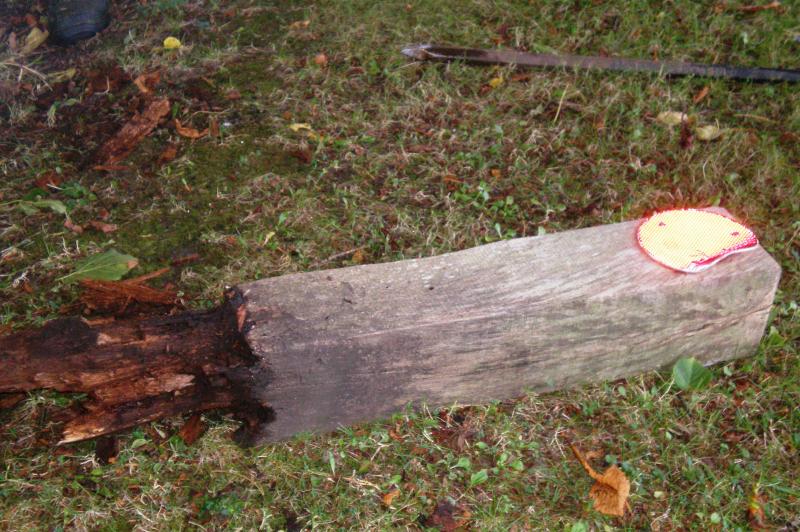 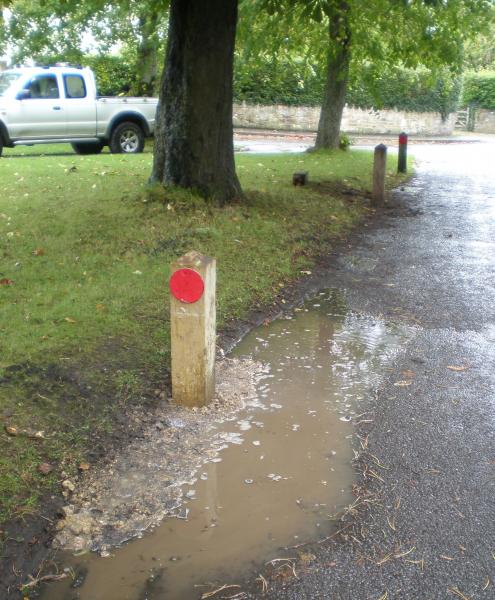