July '22 Yesterday, years 5 and  6 from High Ham primary school spent the day at the History Hut. After the walk down, and a snack, they chose which books to read, or look at outside and in the Hut. Activities were mostly fun - not too much studying as they have worked hard this year. Different groups made Bug Hotels, identified birds and insects. Some plaited rope for skipping ropes,  walked a line while looking through binoculars upside down. That's harder than it looks! It was brilliant just watching them run around exploring in a huge safe field. 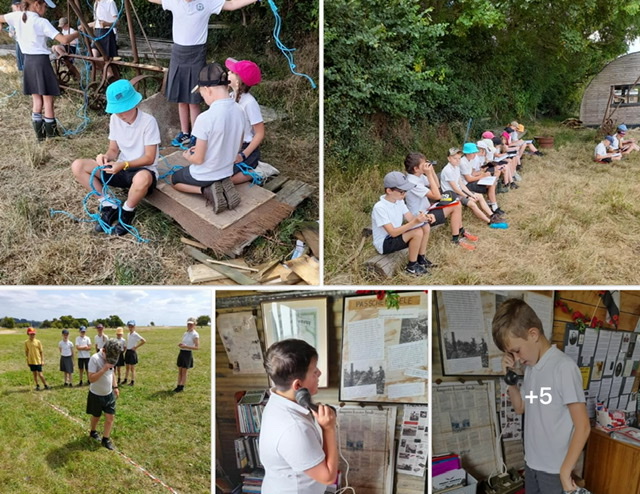 March '22 Hambridge School visited the History Hut for their work on the Romans. They were shown someo the  artefacts that were found at the Low Ham Villa site. The children did some work outside, and walked down the field to visit Low Ham Church. The Hut will be open on Good Friday & Easter Saturday. 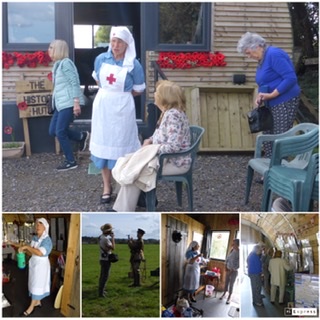 The History Hut opened 3 years ago, as somewhere to learn about local history. Some of the information is about our Parish, and some about our County of Somerset. We have a lot to be proud of, which we might not always know about. Our area has remains of a Stone Age village, Roman Villas,  Mediaeval Gardens, The only Thatched Windmill in the country, other beautiful buildings and scenery. The county has been the site of battles, at Sedgemoor and Langport.  Somerset was involved with Operation Bolero, which became Overlord, and was the start of the D Day landings.

We also have heroes, some military and others in different walks of life.

The Hut itself was used by the Gloucester Regiment, during WW2, and there are drawings by Stanley Lewis, of the searchlight battery that was sited here.  I have had help from so many people, to gain information, and have been kindly given some artefacts.

Admission is free, and any donations I get are for The Royal British Legion. I produced a booklet in 2018 to commemorate the Centenary of the end of WW1.   Somerset County Council kindly paid the printing costs, so sales of the booklet have made a profit. The Millenium Wood at Henley, was once allotments given to soldiers returning from The Great War, so I wanted to buy a bench to put there. With the money raised, the bench is now in the shelter at the Wood, and I also sent £50 to Help for Heroes.

The History Hut was open this 12th/13th September. On Saturday there was a a display of The North Somerset Yeomanry, WW1 and some WW2 military vehicles. Most importantly as it is a 3rd Birthday, there was CAKE. 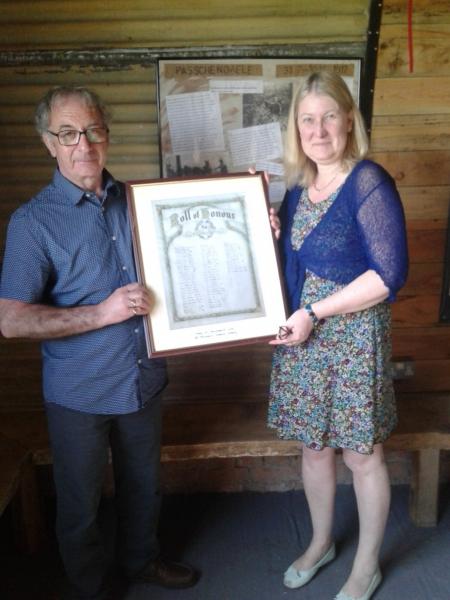 Paul and Pat Adamson with a copy the Othery Roll of Honour, presented to The History Hut.

Pat is researching the stories of some of the men who died in The Great War. 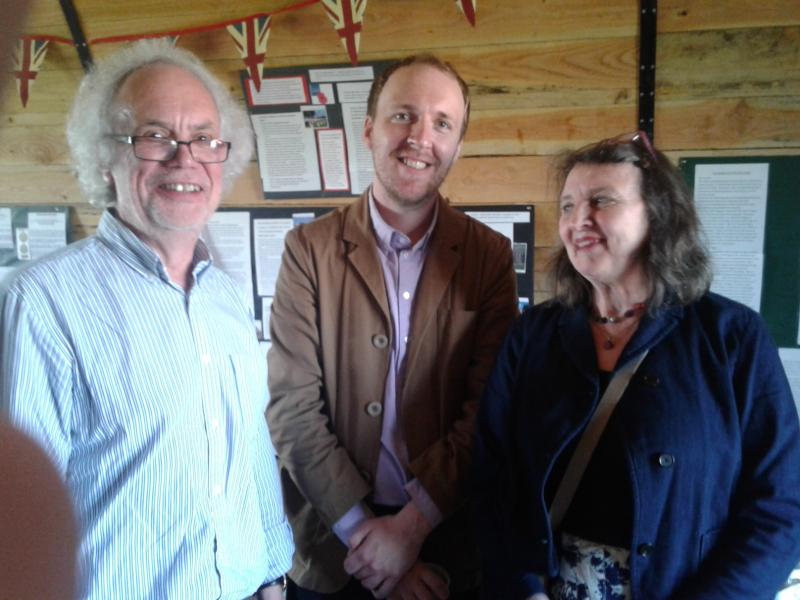 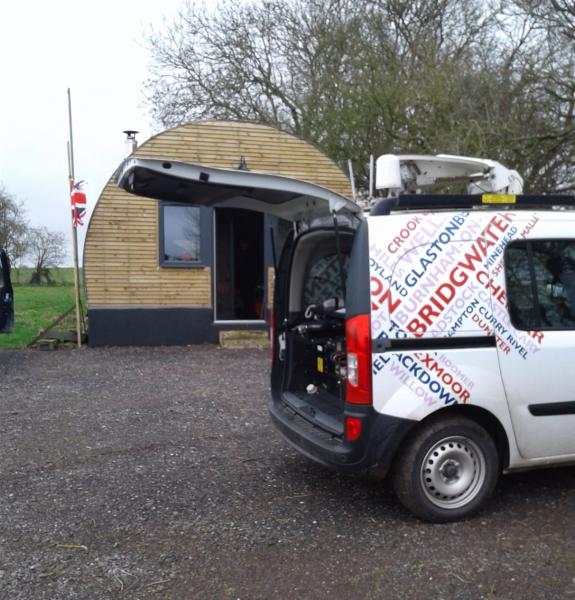 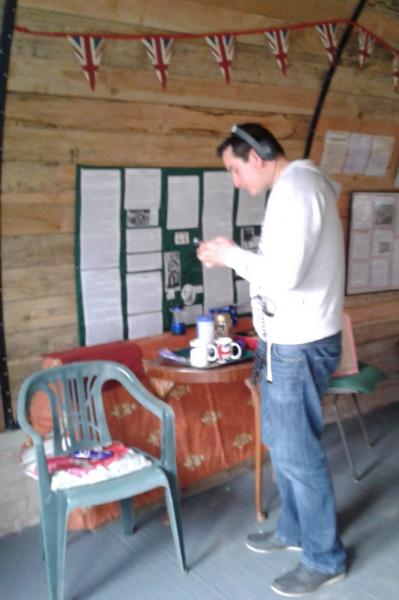 BBC Somerset visit The History Hut to learn of the hut's history and to see the displays. 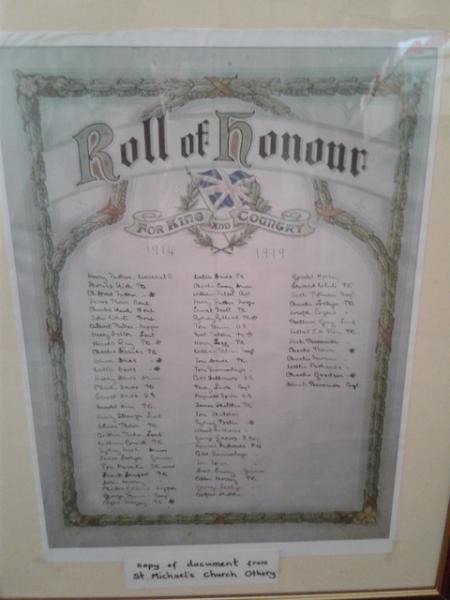 This is a copy of the Roll of Honour that hangs in St Michael's Church, Othery. it was kindly given to me by Pat Anderson who I met at the Western Front Society meeting that I go to in Othery. Research is being done in Othery to find out the stories behind the names, and this will be on display later in the year.

The History Hut will be open on Tuesday March 3rd between 6-8pm. This will be a drop-in meeting for anyone from a Club, Group  or Organisation who would like to be involved in this year's Somerset Steam and Country Show. It is a chance to meet some members and see if you could do some fund raising by litter picking, stewarding, or running a stall or activity. Everone Welcome.  Karen Cook

The History Hut - its story

The History Hut is one of two remaining nissen huts used by the Gloucester Regiment in WW2. There are drawings by Stanley Lewis, a war artist, depicting the soldiers and their life while stationed in the huts.

On the brow of Hext Hill overlooking Low Ham (TA10 9DR) with far-reaching views of Glastonbury Tor and up to Stembridge Mill at High Ham, the huts are easy to visit by footpaths or road, and there is disabled access.

The information displayed is of local history, from the Roman Villas at Low Ham and Pitney, King Alfred, the unique Church in the Field, the Battles of Langport and Sedgemoor, and various local people who have an interesting story. The main aim is to remind people of our local families affected by the two World Wars. The war memorials, Home Guard, and pictures of everyday life during the war.

The History Hut will be admission free to view, but there will be a donation box for the Royal British Legion. Spring 2018 there will be a Tea Room on site. The Hut will be available for hire for meetings, art/photography clubs, school visits or small social gatherings. Catering can be arranged for hot or cold refreshments. 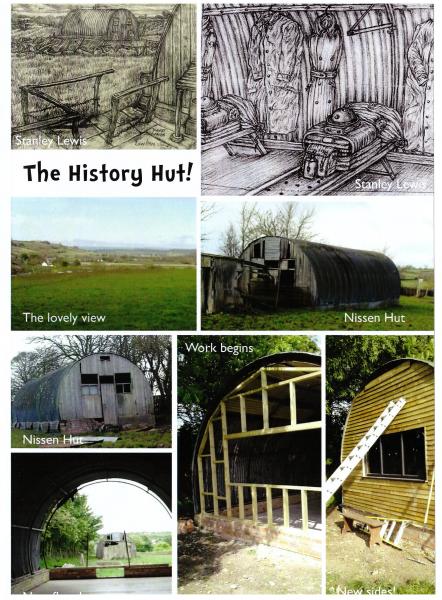 The History Hut was full on Dec 10th for the family Festive Evening. Mrs. Edwards led the school choir, thank you to her, the parents, grandparents who brought the children. It was a messy wet weather night, but the warmth in the 'Hut' through the service led by our Rev. Jess, and the beautiful singing, poems and stories surrounded everyone there.  £87 was collected for the Low Ham Church in the Field fund. 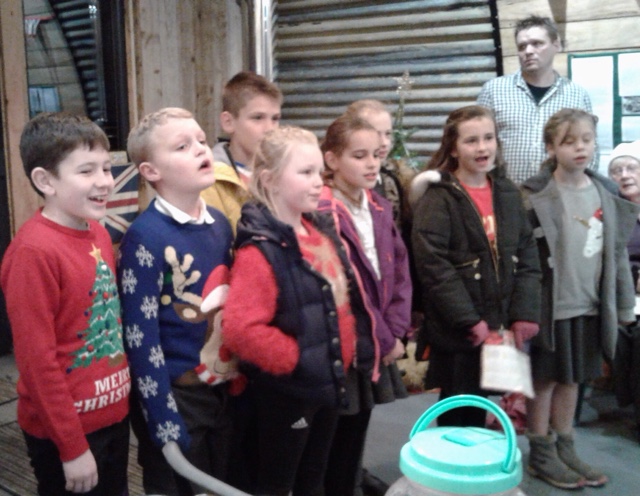 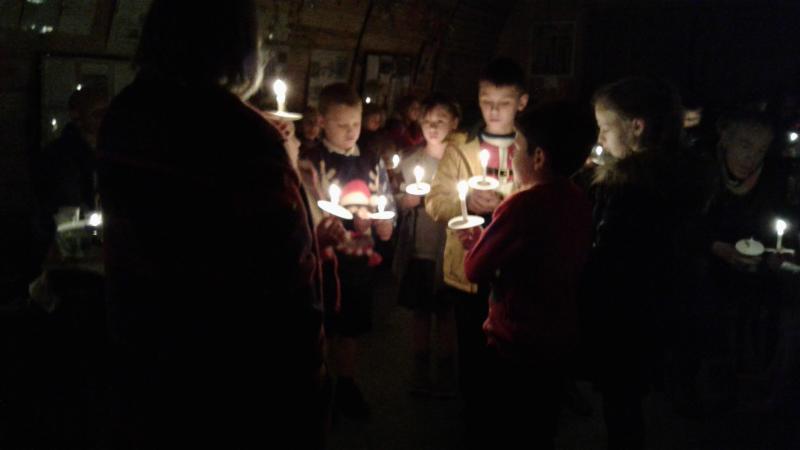 The History Hut had lots of visitors over the Remembrance weekend including quite a few of the older generation - it was lovely to hear their stories. I had a display about Passchendale, as this battle ended 100years ago on November 10th. The interest in our local history is growing, and there are several little groups that are gathering information for us. Karen Cook 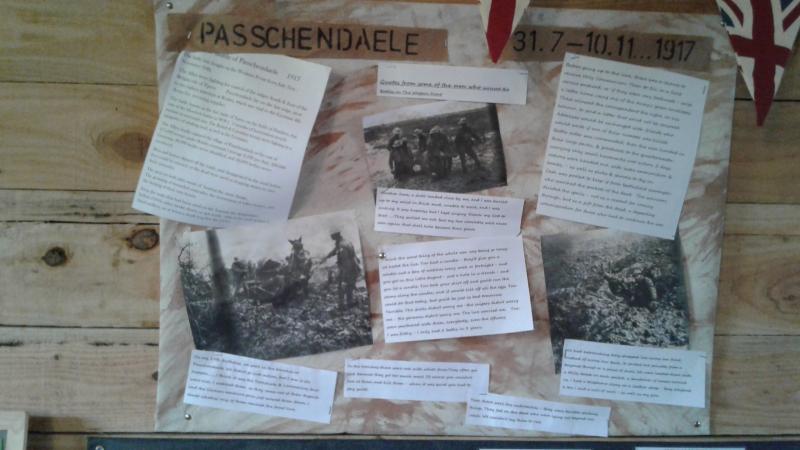 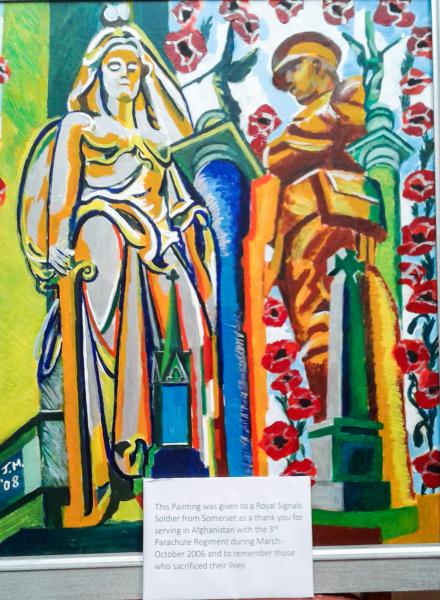 The painting was donated by Annette and Raymond Morris

The History Hut had its first open weekend on the first weekend of September. there was a steady stream of visitors both days. tea/coffe and biscuits were free - donations were given in aid of The Royal British Legion, £167.20. On Saturday some people sat outside in the sun and enjoyed the view, but on Sunday the log burner was roaring away as it was cold and rainy!       Karen Cook 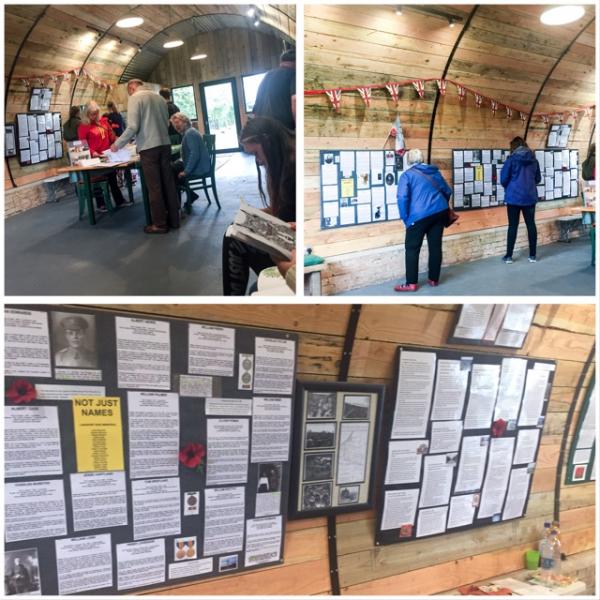 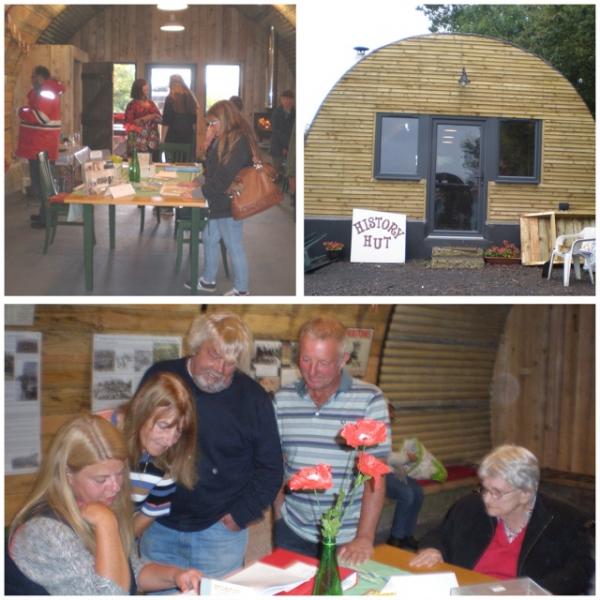